“I have always remained an activist. I understand what immigrants and asylum seekers have to go through”

Anne-Ruth Wertheim (83), daughter of a Jewish father and a non-Jewish mother, was interned in a Japanese camp for Jews in West Java.
“I have always remained an activist. I understand what immigrants and asylum seekers have to go through” 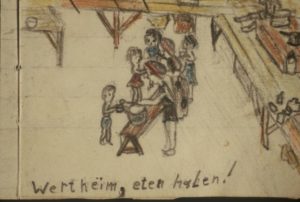 A child's drawing by Anne-Ruth, her sister Marijke and brother Hugo Wertheim 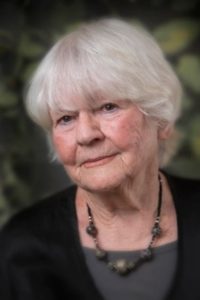 What was your life like before World War II?

“I had a wonderful life. I was born in Batavia, as Jakarta was called when Indonesia was still a Dutch colony, in 1934. My father was a professor, my mother, too, was a working mother. I think it is important to mention here and now that there were some 300.000 Dutchmen and 60 million Indonesian people, and that we were in charge. 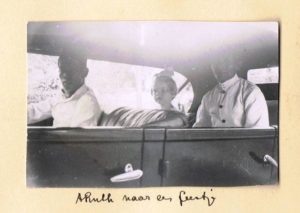 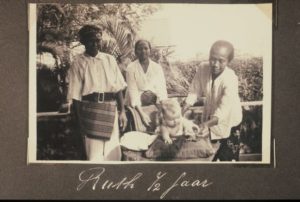 That was wrong. But as a young child you are innocent of the fact. Look at this picture. Here you see me, a five-year-old on her way to a party, all by herself, on the backseat of our car with an Indonesian driver and, in addition, our domestic servant acting as a chaperon beside me.

“That is how I lived, together with my younger brother Hugo and my older sister Marijke, veritable rich kids. Here you see me in an elementary school classroom picture: white children only. 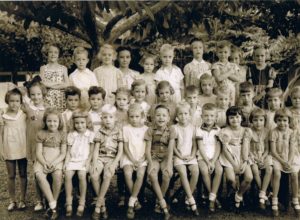 We never played with Indonesian children. I once saw a couple of children in a kampong where the Indonesians lived, we never ventured there. They went barefoot, which seemed marvellous to me. And I thought: lucky them. We had to wear sandals. I remember our amazing holidays in the mountains. I slept under a blanket which smelled of camphor. I still love that smell.”

What happened to you during the war?

“When I was five I caught my father crying on the phone when he was told that his parents in the Netherlands had committed suicide on the day the Dutch capitulated to the Germans. My father was Jewish, my mother non-Jewish. His parents had had premonitions about what the Nazis were intending to do. My parents, mind you, told us children that my grandparents had fallen ill, but we sensed their anguish.

“Our Jewish identity did not play a role in our family. My parents were non-believers. When, by the end of 1941 the threat of war with Japan was growing, my parents took us to a tea plantation in the mountains, fearing bombings of Batavia.

“We went to a Dutch planter who was liked by the local people. So, even then, my parents were afraid that with the arrival of the Japanese, the Indonesians might turn against the Dutch. That is why we went to this particular man.

“When the Japanese had won the battle early 1942, we returned to our home in Batavia. My father had already been arrested and taken away, we did not know where. I did not see him for three and a half years. The school was closed, we were taught by our mother. I learnt all about secrecy, for you were not allowed to talk to anyone about it as teaching was forbidden. In 1943 we were ordered to leave our house and go to the women´s camp Kramat in a fenced off part of the old city. It was hard having to leave my dolls. I was eight years old. 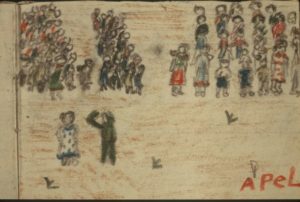 The daily roll call and having to bow, a drawing made in the camp by Anne-Ruth, Marijke and Hugo Wertheim

“At first things were not too bad in the camp, we lived in normal houses, albeit with dozens of families crowded together. We played the whole day long. My mother had brought along colouring pencils and paper. The pencils got worn down to the nub, shoes got worn out, we were walking barefoot.
“In September 1944 we were told that all people with Jewish blood had to register. My mother explained that this applied to us. The Japanese were allies of the Nazis, that was why. My mother faced a terrible dilemma. If she told them that she was non- Jewish but that her children were Jewish, we might be separated. She could also keep silent about it. Wertheim was a Jewish name indeed, but chances were the Japanese would not realize this. But suppose one or other of the Dutch women would disclose this fact during a quarrel – and in these circumstances people were quick to quarrel among themselves. And suppose my father did have himself registered, all would be disclosed, and she did not know where my father was. Children will sense when something is terribly wrong. Also, my mother was seriously ill at the time, she had been admitted to the camp hospital, but she did tell us about what was going on. We were taken care of by Dutch fellow prisoners. 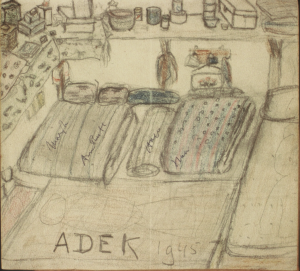 “I was also scared of the Japanese punishments, I saw terribly cruel things. To give you an example, a girl who had done something wrong had to hold a crate over her head for hours on end. Her arms turned blue.
Eventually my mother decided to say that she, too, was Jewish. And so the four of us had to go to a separate camp in an old juvenile detention centre in the small town of Tangerang. The journey there in a shuttered train was hot and dreadful. It was a terrible change for the worse, I had just turned ten. In a dormitory with 84 people we slept on two-tiered bunk beds.
While armored soldiers were watching us, we had to do chores like working in the kitchen garden for instance. The toilets were holes in the ground, there was a lot of diarrhoea, shit spilled over the stones, messing up your bare feet which you’d more or less wipe across the ground before climbing on to your bunk bed. The stench was appalling.
After three months the whole camp was moved to yet another one, - Adek -, not much better than the previous camp. My strongest memory of the last few months in that camp is: hunger. How your stomach ached. We talked about nothing but food: has it arrived yet, will it be a little more today? On some days we had simply nothing to eat.
Japan capitulated on 15 August, but we were not told until 24 August. We were liberated by a regiment of British Indian Army Gurkhas. Everybody was assembled, I remember the Dutch national anthem – the Wilhelmus – being sung, I was moved. Not much later my father found us in the camp. He arrived on a rickety bicycle wearing slippers, I recognized him immediately. He had been in a men’s camp. It took weeks before he found us a new house in Batavia, our old house having been completely stripped down to and including the electric cables.

How did these war experiences affect the rest of your life?

At first the Indonesian people lived in the kampongs again and we in beautiful houses. At the same time the Indonesian struggle for independence broke out. There was a lot of fighting, my brother even found empty shells in our garden. My parents were convinced that Indonesia should become independent, which was not a popuplar viewpoint among other Dutch people, but they took time to explain this to us at length. As a result of working with students, some of whom of Indonesian origin, my father had come to realize how wrong colonialism was. At the beginning of 1946 my father took leave and we returned to the Netherlands.
First I went to an interim school in Leiden. There we were jeered after by the children who were jealous that repatriates from the Dutch East Indies were given double amounts of ration cards. They would call out “Hey, go back to your jungle, you monkeys” to which we would reply: Hey you, Leiden slicks!”
My father was appointed professor in Amsterdam where I went to secondary school. My parents were furious about the colonial war, their viewpoint was generally known. As a pupil at school I was held accountable for it, you know, and that hurt, although I did agree with them.
After my time at school I studied biology. I married young, had three daughters and together with my husband we lived in Wageningen where I became a teacher and worked on educational reform. From my experience as a camp child I knew that children can be independent from an early age and I didn’t agree with the old bookish style of learning. I was an advocate of discovery learning and project-based-education.
After thirty years I got a divorce. It was a difficult period in which I also went into therapy. I don’t suffer a trauma from my camp experience but I did suddenly understand the sometimes unexpected fierceness of my emotions. They are a result of a past in which you had no control over what was happening.
At the moment I live in Amsterdam with my new partner. I made a little book about my childhood in a Japanese camp called “The goose snatches the bread from the ducks” with our children’s drawings in it. It was finally published in Japan this summer. I am very pleased.
I have always remained an activist. I believe I understand what immigrants and asylum seekers have to deal with. Never to know where you stand, better not talk about your past or you might be in danger, all that is bad for a human being. I write articles against racism on www.joop.nl and in newspapers and I distribute them via Facebook. This is how I want to continue contributing towards a better world”.
https://www.trouw.nl/samenleving/wrede-japanners-koude-nederlanders-twee-verhalen-over-de-bezetting-van-nederlands-indie-en-wat-daarna-kwam~a25e4e37/