My drawings of shady ladies at the bar

In 1951 my secondary school in Amsterdam was celebrating its twentieth anniversary. The preparations were in full swing, and our science class was asked to run the bar. In those days the pupils in science classes were mainly boys, and ours was no exception.

The bar was to be set up in the room beneath the stairs in the school’s main hall, and we all went down to take a look. What we found was a gloomy cavern with old school desks stacked up on the floor and bare cement walls. I don’t quite remember how it was all decided, but it was soon perfectly clear that we were going to stick big posters up on the walls. The few boys in our class who looked and acted more grown-up, giving them an air of authority, assured us they knew what such places looked like on the inside, and they decreed that the posters had to show shady ladies drinking alcohol.

No-one seemed in any doubt that the posters should be drawn by me. And it would be done in the spacious art workshop that spanned the top floor in one wing of the building. Our drawing teacher Mr Elffers was there all day, and you could drop in at any hour – provided you had a ‘free-choice’ period, which was part of our school’s Montessori-inspired system.

My reason for mentioning all this now is that I recently received an e-mail from Anne-Ruth Elffers – the daughter of Jan Elffers, who died in a car crash in Spain in 1989. At a school reunion in 1961 he had told me he had named his then one-year-old daughter after me, and she wrote that she had always known this. ‘Now I can’t help wondering who I was named after.’ 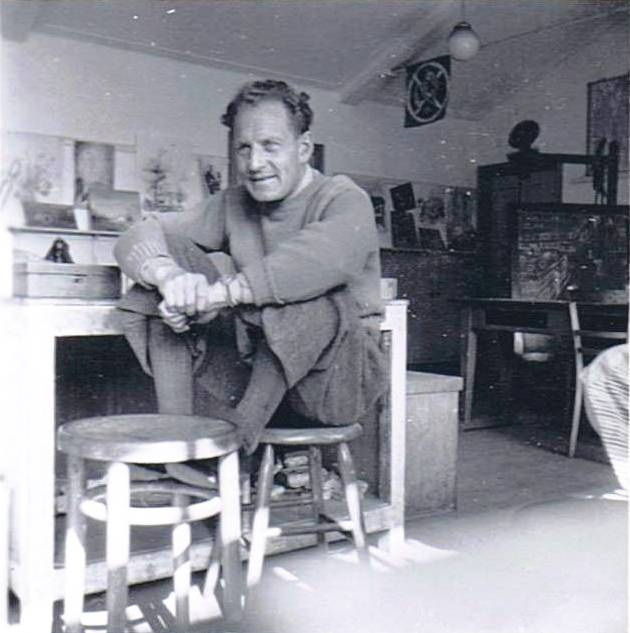 Jan Elffers, the drawing teacher at my secondary Montessori school in Amsterdam Photograph by Anne-Ruth Wertheim, 1953

Having long planned to write a story about how those drawings came about, I immediately began searching through my old stuff – and I found them, though rather the worse for wear, in the ‘1951’ file.
As soon as the decision had been made about the posters, our group rushed up the stairs to the art workshop and presented our plan to Mr Elffers. He handed out sticks of charcoal and big sheets of drawing paper, and we took up our positions at the high, long drawing table with its view of the schoolyard. Standing with the boys gathered round me, I began sketching a young lady on a bar stool holding a half-empty glass of wine. She was glancing seductively to one side, her bare shoulders protruding from a tight bodice above three-quarter-length slacks. Three-quarter-length slacks were hot, and said a lot about anyone that dared to wear them – and the same went for the criss-cross sandal straps that crept up her bare lower legs.
The second young lady, also wearing three-quarter-length slacks, had a large bottle of gin tilted provocatively to her lips. And the third was stretched out on the beach clutching a bottle of wine, and was wearing what was then the dernier cri, but as far as I recall not yet known as a ‘bikini’ – briefs with a loose but robust bra.

While I was sketching, the boys encouraged me with their yells. Yes, the proportions were right, but the bar-stool woman’s long black hair should be shown hanging down her bare back. And the beach woman’s briefs should be a lot more brief.

Suddenly, for reasons that remain unexplained to this day – no such thing had ever happened before – one of the other staff burst into the workshop. It was our geography teacher, Mr Alessie, who seemingly had urgent reasons to climb all those stairs. Without a word he headed for our table, picked up my drawings one by one, looked at them, turned them over and piled them up. Then without so much as a glance he disappeared, leaving us behind in utter confusion. We looked questioningly at Mr Elffers face and thought we could see that, unlike us, he was not surprised by the uninvited guest’s arrival. Did he know, or suspect, that the geography teacher had been tipped off by someone who had seen our flippant group at work?

In the classroom Mr Alessie made no secret of his old-fashioned moral principles. And he repeatedly hinted – even though ours was a non-denominational school – that those principles were based on his Catholic faith. Although he did quite a lot to modernise geography teaching, for instance by sending pairs of us out into the city to study geographical reality ‘on the ground’, his political views were unyielding, and his lessons far from impartial.

In the previous years a colonial war had been raging in the Dutch East Indies, stirring up fierce emotions both in and outside school. Most Dutch people thought there was nothing wrong about crushing the Indonesian people’s independence struggle by means of the so-called ‘policing operations’. But there were some who backed the Indonesians, and in those days, with the colonial mindset still prevalent, this minority had the utmost difficulty in getting their voices heard – for they always risked being accused of high treason.

Of course we fifteen- and sixteen-year-olds were still largely guided by our parents’ attitudes, and so most of my classmates thought the war was necessary, or at least a necessary evil. But my parents were part of the rebellious minority, and luckily I was not the only one in our class with such parents. So whenever any of us dared utter the name Indonesia, a furious Mr Alessie would bend down chanting Our-Dutch-East-Indies!

But now we stood there in perplexity, and all we could think of doing was start work on a fourth poster. Then a pupil from the senior class slipped into the workshop and began whispering to Mr Elffers, whereupon they both left. So there was more to all this. The focus of our attention instantly switched to the schoolyard, whose walls were adorned with Virginia creeper, and the headmaster’s study one floor below. Although there were lace curtains covering the windows, light came in through the ones facing the street. And as we stood with our noses glued to the glass, we witnessed the following dumb-show. Elffers walked in and sat down opposite the headmaster, Mr Schreuder. After a while he stood up and began pacing angrily back and forth. Then he came over to the window sill, fortunately on our side of the study, and sat there with his knees drawn up. We could see him gesticulating furiously, and occasionally raising his arms heavenwards.

Back in the workshop he quickly walked past us with barely a glance, and mumbled ‘You can’t put these up’. He gave us no further explanation of the ban, and we didn’t ask him for one – we knew the score. As far as I can remember we didn’t discuss it with each other again, and looking back I regret that – I’d now like to know what the boys thought of it all. The geography teacher continued to ignore us, just as he had from the outset – and so did the headmaster. I myself felt slightly embarrassed, though of course it had really helped that Elffers had tried so hard to defend us. I know I felt rather sorry for him because his brave efforts had not been rewarded.

A few months later I discovered in a surprising way that our class teacher who was giving math, Mr Cornelissen, had also taken a different view of the matter. I had an appointment to discuss something with him – I can’t remember what. He was sitting at his desk in his study, and I sat down opposite him. As usually he looked attentively at me, listened to what I had to say, and replied briefly and to the point. But suddenly he broke off, and I heard him say ‘I did like your drawings’. With an almost imperceptible smile on his face, and still staring straight at me, he nodded to me that I should look at the cupboard behind him. Then he pointed to the rolls of paper piled up on top of it and said ‘Look, there they are!’

I must have looked pleased and perhaps answered something, but oddly enough it was not that I wanted the drawings back. He indicated that he would leave it at that, and picked up where he had left off. Only when I had graduated and was no longer thinking about the drawings did he give them back to me with a friendly handshake. And since then I have kept them just so I could write this story about them one day.

Shady lady at the bar 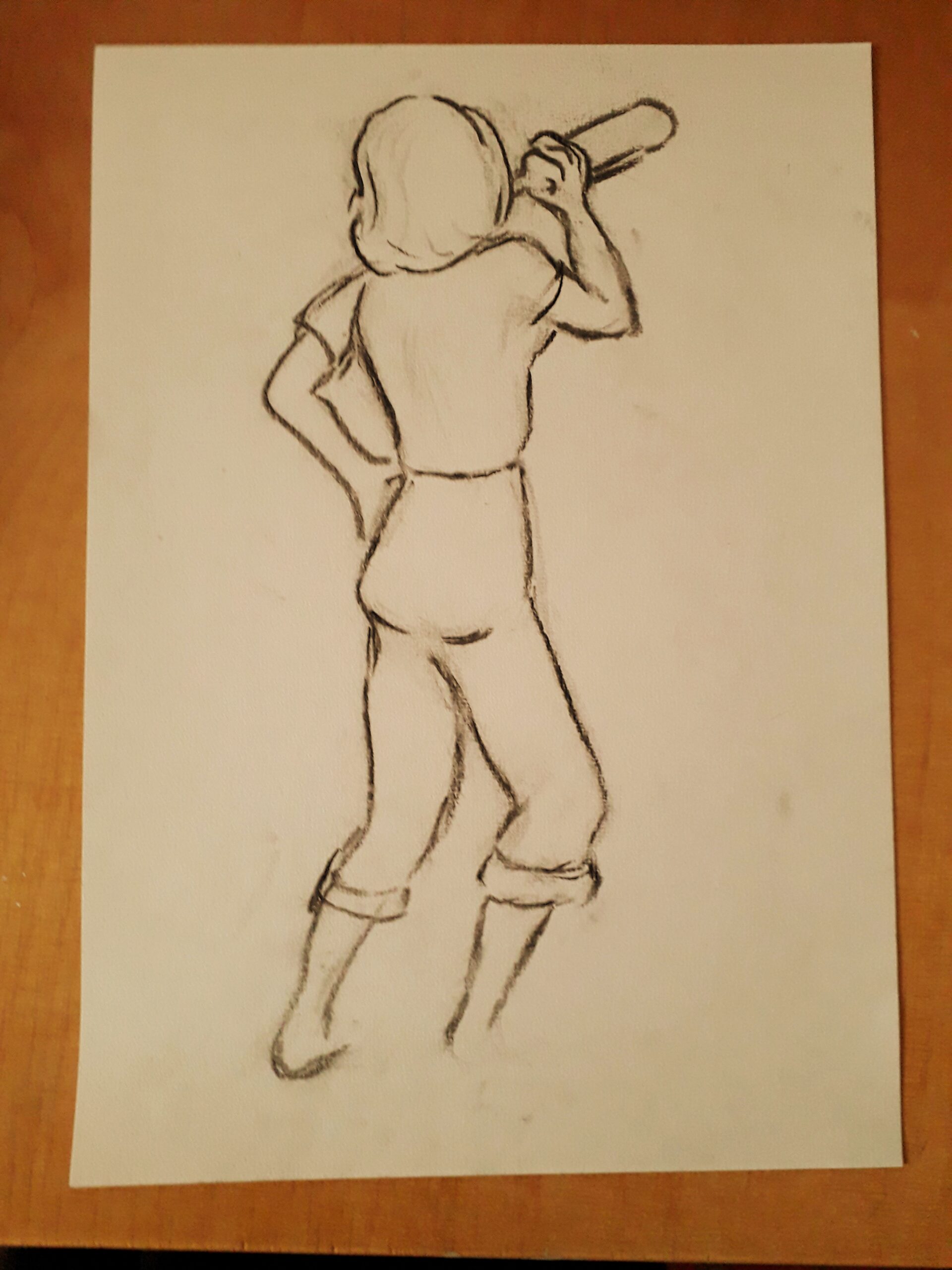 Shady lady at the Beach